A Metallica Instagram post has led to speculation that the band could be doing a 30th anniversary ‘Black Album’ tour for their return to the road after the pandemic and James Hetfield’s rehab stint.

Wolverinekills posted on Facebook, “SPECULATION: Is Metallica Going To Play “The Black Album” In It’s Entirety Live In 2021?:

With most European festivals postponed & Metallica confirmed for Aftershock Festival (and most likely Louder Than Life & Welcome To Rockville – although that is not official) could the hint below with a picture of the band playing live indicate the band intends on playing their self titled album live?

If so, it leads to the assumption the band might be back to playing 2 nights at those festivals like they are scheduled for at Aftershock, and set for originally before dropping off then being re-added back to the line ups.

So would a Metallica set of hits one night followed by a set where they play “The Black Album” be of interest to you?”

One fan commented, “My guess would be a 30th anniversary deluxe boxset due to covid, they already played it in it’s entirety back in 2012.”

Another fan said, “I’ve seen them do it before at their Orion Music +more Festival. They played all of Kill Em All at the same festival the next year.” 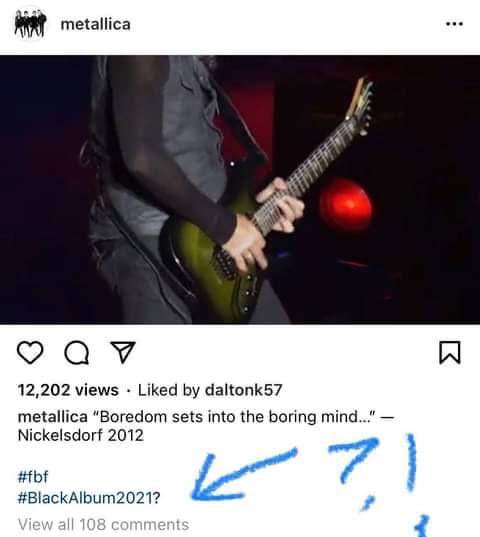 Liam Gallagher Kicked Out Of The Beatles Studio