Harry Styles fans certainly enjoy ‘Harryween’ which has become an official holiday of sorts for them. This year, Harryween/Halloween coincided with the midpoint of Styles’s whopping 15-date residency at Los Angeles’s Fabulous Forum making this his first-ever West Coast Harryween show  and on Monday, he stood in front of the 18,000-strong crowd of costumed revelers and told them, “Please feel free to be whoever you want to be tonight.”

Other fans went meta and rocked costumes referencing Styles’s past Halloweens, like his Elton-inspired rhinestone-studded Dodger uniform from 2018 or the Dorothy-from-Oz gingham dress he wore at last year’s Harryween show at Madison Square Garden. (When Styles sang, “Did you dress up for Halloween?” in the Harry’s House song “Little Freak” Monday, suffice to say everyone in attendance immediately freaked out.)

But of course, everyone was wondering what Styles himself would wear. And he definitely did not disappoint his hopelessly devoted fans: Grease was the word. Entering the stage to “You’re the One That I Want,” his bandmates were decked out in full Rydell High regalia — a Rizzo and Marty Maraschino in pencil skirts and matching Pink Ladies satin jackets, a “Beauty School Dropout”-era Frenchie with her head pyramid-stacked with hot rollers, a nerdy Eugene behind the keyboards, a post-makeover Sandy in big blonde poodle curls behind the drums. And then the one that everyone wanted, Styles himself, strutted out as a hand-jiving Danny Zuko.

Styles was totally serving Travolta realness, but was also channeling ’68 Comeback-era Elvis (the Forum’s in-the-round staging added to that effect) and even a bit of androgyny a la the sideburned Annie Lennox at the 1984 Grammys or Lady Gaga’s short-lived drag-king alter ego Jo Calderone. He donned a black leather biker jacket, black “Harryween” muscle tee, bobby socks, and a shoe-polish-black pompadour wig. 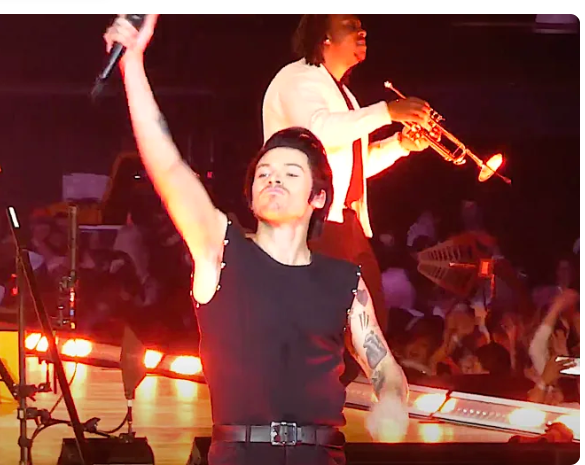