Gucci has been bashed for its ad with former One Direction member Harry Styles. Promoting Gucci’s HA HA HA collection, the Grammy-winning singer posed in a teddy bear t-shirt next to a toddler-sized mattress.

The Gucci campaign was released last month, but is facing fresh criticism in the wake of the Balenciaga scandal. Balenciaga was widely criticized for its holiday ads featuring young children holding teddy bears dressed in bondage gear. Kering is the parent company of both luxury fashion brands.

Among those to publicly speak out against Styles’s ad campaign is Alexandra Gucci Zarini, whose great-grandfather founded the Gucci brand.

“Why would you create a ‘performance piece’ with a toddler’s mattress and an adult man?” Zarini wrote on Instagram, according to a screenshot captured by The Daily Mail. “My concerns are that there seems to be a common ideology across Kering’s fashion houses.”

The campaign, which was released on Nov. 2, was conceived by former creative director Alessandro Michele. Gucci announced in late November that he would be exiting the role after seven years. In last month’s press release touting its collaboration with Styles, Gucci explained that “play is at the very heart of the Gucci HA HA HA collection.”

“Its name after all is the onomatopoeic sound of the written essence of the ‘laughing face’ emoji, as well as the serial crasis of the initials of ‘Harry’ and ‘Alessandro,'” the brand declared. “Starting from those small oddities that come together in childlike visions, it turns into a ‘dream wardrobe’ reflecting the two creative spirits behind the collection.”

Yahoo reportedly reached out to Gucci and Kering for comment. Gucci shared the controversial image on Instagram last week and outraged users have taken over the comments section.

“Is this an ad for kids mattresses? If not… why is a kids mattress included with a man in a fashion ad… what are you trying to normalize,” one person wrote.

“Unless he is about to announce his expecting a baby, nothing else can justify the Mattress. I don’t want to hear it !!!!!!” someone else commented.

One Instagram user put it bluntly: “What in the Balenciaga is this?” 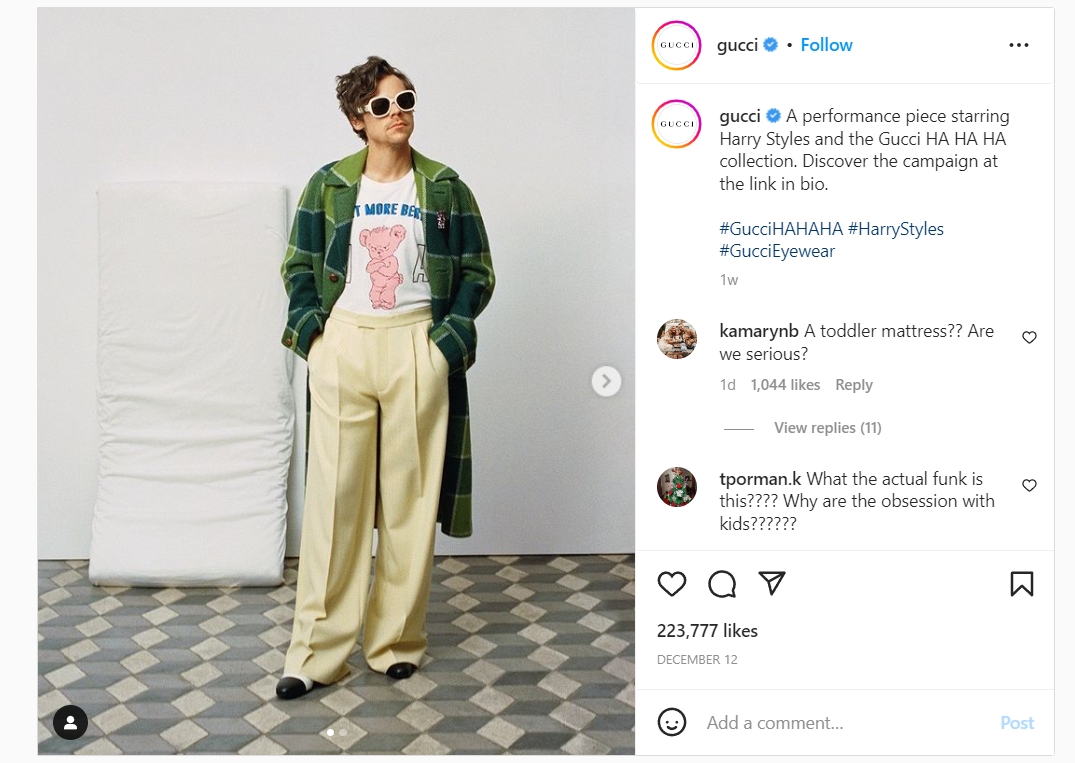