U2 singer Bono was visiting his childhood home on Cedarwood Road when he bumped into a young debutant. The star was filming a documentary segment to be a part of his memoir that will get released in November. Lucie Dunne, 18, was on her way to the debs when she noticed Bono and asked for some photographs.

The 62-year-old star happily obliged and even went down on one knee to the surprise of Lucie and her family. Bono’s gesture got him various applauses from members of the group to random people who found his humble act exemplary. Bono is a bonified star who has worked well over the years and made a name for himself in the industry. Lucie’s uncle Trevor was humbled by the gesture and said:

He came out and he was really generous with his time. He stayed for about 20 minutes, and he came over towards me and he saw Lucie and he said, ‘Oh my god, the debutante. I’m in the presence of royalty’. He sort of went down one knee and gave Lucie a little twirl and was really complimentary to her. I think he said to her to mind herself and her friends and to have a great night but be home early and he started laughing.

Bono has previously talked about his half-brother from his father’s side. He said that only he learned about it, and even his mother was unaware of it. His mother passed away at Bono’s very young age. Bono was only 14 years old when this happened. He shared this information while speaking to Lauren Laverne on BBC Radio’s Desert Island Discs.

Bono’s life is a lesson for everyone that anything can and will happen instantly, so you must make peace with things sooner than later. Bono remembered his childhood and how he had a tough time with his father. He talked about his half-brother with his father, but he felt that his father wasn’t sure about what he was doing because his mind was all over the place.

Bono continues to inspire people with his random acts of kindness. Do you have any Bono stories? Chime in. 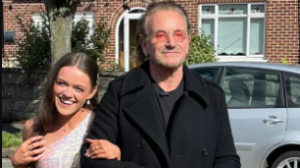