Olivia Wilde is back and better than ever as her presence was sorely missed by so many after her and Harry Styles broke up and we are just so glad to see her back and beaming. H/T Page Six.

After the break up happened, there were sightings and rumors that Harry was doing great and even moving forward heavily. In one instance, Harry was seen at a car dealership looking at six figure vehicles.

Olivia, on the other hand, was nowhere to be found on social media. The “Don’t Worry Darling” director was beaming in her return to Instagram over the weekend — following her split from Harry Styles last month.

“Best,” the actress captioned the selfie, which showed her Conscious Commerce business partner rocking a lime green bikini top and a straw bucket hat. The “Booksmart” director also took to her Instagram Story to share a snap of herself strolling along the beach in Hawaii.

The post marks the first time Wilde has appeared on social media since news broke that she and Styles, 28, were going their separate ways.

A source stated: “There is no bad blood between them. Harry didn’t dump Olivia, or vice versa. This is the longest relationship Harry’s ever had, so clearly they have a special bond.”

The insider cited long distance as a major factor in their decision to call it quits.
ort she was dating the “Watermelon Sugar” hitmaker in January 2021, when the two were photographed holding hands at a wedding.

The outing came shortly after Wilde ended her engagement with Sudeikis, leading to speculation she dumped the “Ted Lasso” star, 47, for Styles — which the actress has denied multiple times.

Wilde even stated about leaving the relationship for Styles: “The complete horses–t idea that I left Jason for Harry is completely inaccurate. Our relationship was over long before I met Harry.” 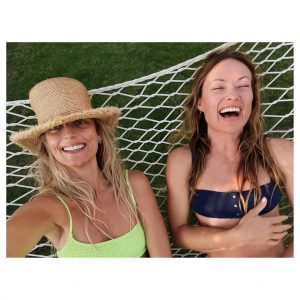 66-Year Old Legend To Be Next James Bond?