Nancy Shevell, wife of Sir Paul McCartney, walked through the streets of London on Tuesday wearing her heart on her sleeve when she walked with him. He wore a navy zip-up hoodie and a white T-shirt with gray joggers and brown leather sandals. Nancy had on a £450 ‘Get Back’ sweatshirt. Stella, her 51-year-old stepdaughter, designed her outfit, which was inspired by the Fab Four’s 1968 appearance on The David Frost Show, filmed in Twickenham, South-West London.

After designers Stella McCartney and her father Paul McCartney attended the designer’s Paris Fashion Week runway show on Monday, Paul was photographed with his daughter and his wife Nancy. Her sister Mary, who was photographing the event for Interview magazine, was also present.

Linda McCartney, nee Eastman, married Sir Paul in 1969. She and Paul McCartney were known as one of the most successful pop music duos in history and had four children together (Stella, Mary, Heather, and James). Linda McCartney, the wife of former Beatle Paul McCartney, had a very unconventional upbringing. She described her childhood as natural and said spending time in Scotland was always where she felt ‘cleanest’.

It’s interesting to see how the kids have gone on to become talented people in their own domain while Sir Paul McCartney is an exceptional talent who has ruled hearts and continues to do so even at this age with his style and grace.

What do you think of this sighting? Sound off in the comments. 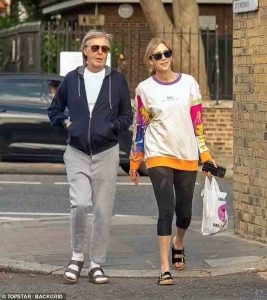