The Oasis frontman Liam Gallagher’s official account recently deleted a series of tweets that contained some pretty questionable views shared after England’s draw with the USA at the World Cup. The superstar’s account fired off lots of tweets aimed at Gareth Southgate and other Three Lions’ players during the 0-0 draw against the States in the World Cup.

Like many other England fans, Gallagher was left aggrieved by the fact Manchester City ace Phil Foden was not used by Southgate. The twitter handle highlighted his feelings in a series of tweets slamming the England boss’ substitutions. However, many of his comments have been denounced as ableist.

In one of the now-deleted outbursts, Gallagher’s account tweeted:

The insult “m***” derives from the term ‘mongoloid,’ which was once used to label people suffering from Downs Syndrome. When people began to call him out for his comments, Gallagher appeared to react angrily by unleashing on those denouncing him. He wrote “f*** you woke s*******” after he was slammed by numerous people.

The insult “s*******” is also deemed to be an ableist comment, due to the fact it was once used to describe people with cerebral palsy. One fan commented:

“Honestly a bad game of football makes you throw out a bunch of outdated ableist slurs? If it’s woke thinking disabilities aren’t funny then sign me up.”

Another more simply wrote, “What’s with the self destruct button?” Another equally offended or upset Gallagher fan also added: “Delete this Liam. It’s an ableist comment against disabled people.”

“Tweet deleted eh??. Disgusting behaviour from someone with a fan following of any kind. You bring shame on the North Gallagher.”

“Delete this Liam. It’s an ableist comment against disabled people.”

“Delete this. Awful and unnecessary.” 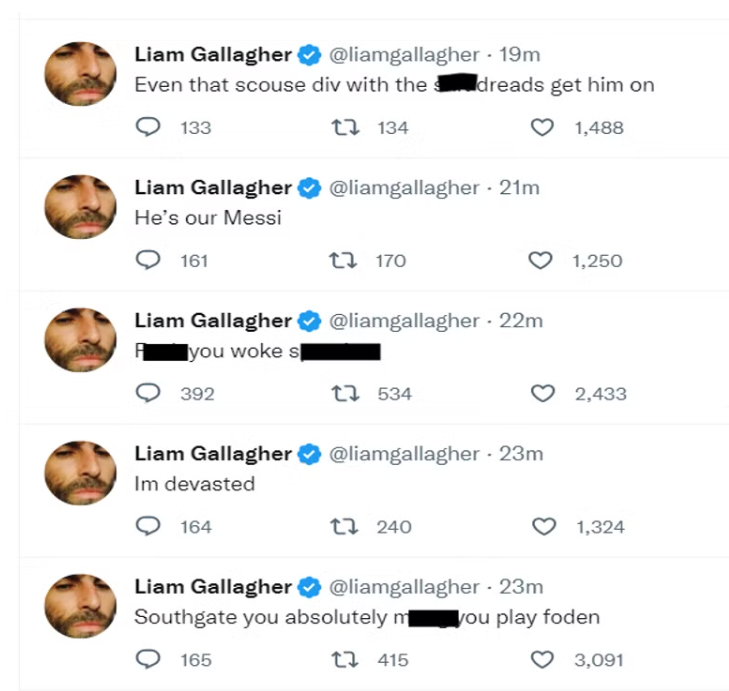 Blur & Radiohead Members Are Teaming Up