by Dustin Schumacher
in Alternative, News
0

Liam Gallagher’s daughter, Molly Moorish confirmed she was dating Liverpool footballer Nathaniel Phillips with a sweet Instagram snap in May, but now, months into their relationship, they truly have been showing how much the absolutely love one another.

As reported by Daily Mail, The two were recently seen out as they enjoyed a tropical getaway over Christmas. The model showed off her figure in a black bandeau bikini as they cosied up in a waterfall in Jamaica as they enjoyed some quality time together.
Molly looked gorgeous in the swimwear as they took a dip in the refreshing waters, while Nathaniel showed off his shirtless physique in navy trunks.

The model first hinted at signs of a romance with the centre-back player, 25, on Instagram last June, uploading a picture of the footballer during a walk and captioned it with a smiley face emoji with love hearts.

Almost a year on, the couple went Instagram official, with a smitten Moly captioning her snap: ‘Big fan of your work @nathaniel_phillips.’

Rumors began to swirl about the relationship early and at the time, everything was silent as family, friends, and those who represented Molly, declined to comment on how deep the relationship was.

Her dad, Liam previously revealed he’d given the relationship his seal of approval, after reconnecting with his daughter following 20 years of being estranged. A source told the Sun during Molly’s romance with Louis: “While Liam isn’t everyone’s cup of tea as a potential father-in-law he’s given Louis his approval. It’s a huge relief as no one wants to be on the wrong side of him. Molly is the apple of Liam’s eye and he just wants to see her happy.”

In February 2020, Molly also revealed she still turns to her dad for ‘boy advice,’ telling GRAZIA: ‘I go to him for boy advice. He’ll be like, ”Stay away from that one…”’

It was reported that Molly was born after Liam cheated on his wife at the time, Patsy Kensit with Molly’s mother, singer Lisa.

Liam Gallagher’s son, Lennon, was also seen with stunning model girlfriend, Isobel Richards as the pair cuddle up in smoking area at a Michael Kors event. 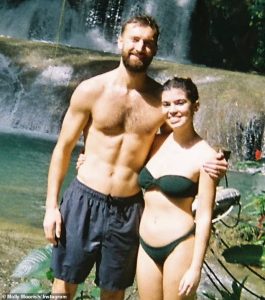