by Dustin Schumacher
in Entertainment, News
0

Olivia Wilde is once again looking happy as the actress showcased her slim frame in silver hued leggings, hitting the pavement in white sneakers. She was seen in a green colored sweater with a large beige tote slung on one shoulder recently. Could someone be behind the smile?

As reported by Daily Mail, Olivia beamed at her smart phone as she made her way to her workout. Perhaps there’s a new man for her.

With rumors of her and Brad Pitt currently swirling, Harry and Olivia split in November of last year, after almost two years together, despite sources claiming there is ‘no bad blood’ between the pair, their relationship was marred by drama.

The two would first meet one another in 2020. Shortly after, rumors of a feud between Olivia and co-star Florence Pugh, 27, began circulating.

The Hollywood actress was then pictured arriving at the former One Direction star’s LA home with her luggage in hand in January and the two were seen driving around California together later that same month.

In December 2021 Olivia addressed the ‘false narrative’ surrounding her relationship with Harry, who she went public with just two months after splitting from Jason.

When Olivia was seen holding hands with Harry, many people jumped at this.

And while the actress said it was ‘tempting’ to correct the false narrative she added in her Vogue interview: ‘But I think what you realize is that when you’re really happy, it doesn’t matter what strangers think about you.’

Last month it was reported Florence and Harry shared an offscreen kiss after developing ‘instant chemistry’ on the set of Don’t Worry Darling – weeks before the One Direction star began a relationship with Olivia. 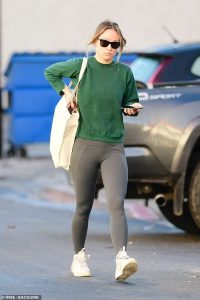