Former One Direction member Harry Styles recently paid tribute to Fleetwood Mac’s Christine McVie who has passed away aged 79 as per her family.

Harry shared the beautiful photograph of Christine to his Instagram Story and simply captioned it with a black heart and a white dove emoji. 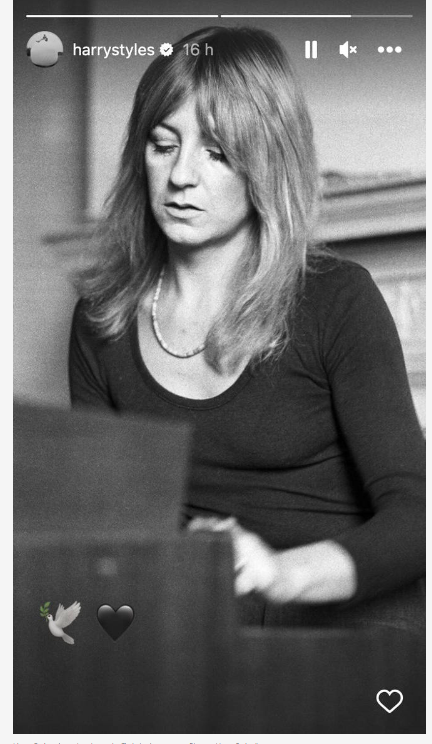 “On behalf of Christine McVie’s family, it is with a heavy heart we are informing you of Christine’s death.

“She passed away peacefully at hospital this morning, Wednesday, November 30th 2022, following a short illness. She was in the company of her family.

“We kindly ask that you respect the family’s privacy at this extremely painful time, and we would like everyone to keep Christine in their hearts and remember the life of an incredible human being, and revered musician who was loved universally. RIP Christine McVie.”

She died peacefully at a hospital in the company of her family, a statement said. McVie left Fleetwood Mac after 28 years in 1998 but returned in 2014.

A statement by the band said of McVie: “We were so lucky to have a life with her.

“Individually and together, we cherished Christine deeply and are thankful for the amazing memories we have. She will be so very missed.”

She was born Christine Perfect and became a McVie when she married Fleetwood Mac bassist John McVie and joined the group in 1971.

Fleetwood Mac was one of the world’s best known rock bands in the 1970s and ’80s. Their 1977 album Rumours – inspired by the break-ups of the McVies and the band’s other couple, Lindsey Buckingham and Stevie Nicks – became one of the biggest selling of all time, with more than 40 million copies sold worldwide.