Miles Kane is on a roll! He has done Glastonbury, Hyde Park and T In The Park all in the space of three weeks. This review is on his T In The Park 2013 performance.

This year is the third year in a row which young Miles has appeared at T in the park. It seems the release of his second album ‘Don’t Forget Who You Are’ has given Miles a new lease of life. His live current performances reflect more of a fully fledged rock and roll star than your average suit bearing mod. The crowd response as Miles struts onto the stage infers that Miles is now a firm household name in the UK festival circuit. Many people are describing him as the new Paul Weller, which of course is a huge complement, however watching Miles live you get the sense that he can become something much bigger. The energy he puts into his performances is nothing short of phenomenal! 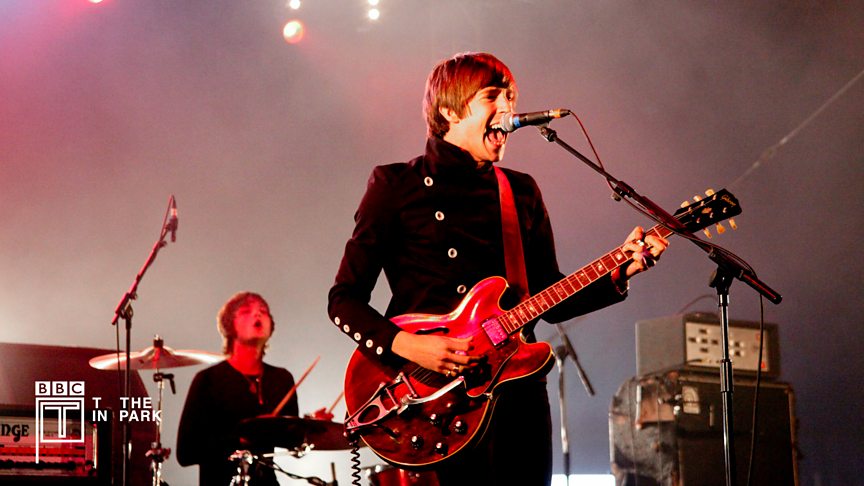 Miles kicks off his set with the opening track from his new album: “Taking Over”.  a current crowd favourite indeed, With the catchy bass guitar introduction this song shows Miles at his brilliant guitar playing best as he cuts through a chunk of dynamic and impressively suave riffs. Next up is old favourite “Rearrange” with Miles making particular use of his favourite bigsby tremolo system. “Let it out, let it out, come on, let it out” generates the first of many crowd sing a long’s in the evening.  “Your Gonna Get It”, an extended version of “Kingcrawler” and the fantastically gripping “Better Than That” follow suit as the set starts to get interesting. “First Of My Kind” is the next crowd favourite as Miles displays his more soulful side. At this point in the set the band start to become more potent and begin smashing the audience with high energy vibes of thunder.

“Darkness in our hearts” is up next. “You got to be, gotta be ready for it” has an instant effect on the audience who suddenly spring back into life and get into swing of things. “Don’t Forget Who You Are”, the main single from the latest album, further gets the crowd going and lights up Miles in a Bolan-esque vibe as we near the end of the set. One of the highlights of the set, “Inhaler” is followed by album track “Quicksand”. Then we get to “Give Up”. During this song Miles cries to the audience “are you ready to lose your f*****g minds?”. The crowd respond and create a huge mosh pit, reminiscent of the famous sex pistols gigs of the 70’s. Miles finishes the set with a fabulous extended version of his greatest hit “Come Closer”.

It would be no surprise to anyone if Miles soon turned out to be headlining major festivals on the big stage. His performance at T In The Park 2013 was packed with tonnes of raw power, rapturous energy and spine tingling flair. You can see the whole performance by clicking on the link below.