It turns out that the former AC/DC drummer is not doing well but it was assured that it is not a COVID issue. He has been advised by the doctors to take this as a warning and not to perform at this time. He also suffered a mild stroke.

“Apologies to all who had tickets for the German shows in Schwerin and Stemwede last weekend. We had no choice but to postpone at the very last minute. Unfortunately Slade became unwell (not Covid related) and was advised by the doctors to take this as a warning and not to perform at this time. After some improvement, we travelled back to the UK for investigative tests. He has suffered a mild stroke but expected to recover fully soon. As you can see, he is in good spirits but aware he is unable to drum at present with the usual power he insists the audience and his band deserve. To aid faster recovery we have reluctantly decided that the two remaining shows for 2021 at The Waterloo Bar Blackpool in November and Spirit of 66 Belgium in December will be postponed till next year. Of course all tickets remain valid for the rescheduled dates, to be announced soon. We’re sure you will join us in wishing Slade a speedy recovery and return to the stage in 2022.” 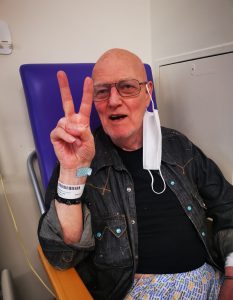 Harry Styles Spotted At Wedding With Women In Photos